Congratulations to Penn State student Josie Krieger for her Jewish Studies Program Special Award for Recognition of Exceptional Scholarship! Josie’s thesis to complete her degree in the Schreyer Honors College is titled “Along With the Others: Jewish Political and Social Experience in Bosnia and Herzegovina (1995-2022).”

Josie graduated this semester from Penn State where she majored in History and Economics with minors in Jewish Studies and Middle East Studies. Throughout her time at Penn State, she co-founded and co-directed Students Teaching Students (STS), was a member of the Presidential Leadership Academy (PLA), TAed for ECON 315 with Dr. Jadrian Wooten, interned with the Jewish Studies Program, and interned at Management Systems International.

Learn more about Josie below!

Tell us about your award-winning essay! Why you decided to write on this topic and give us some insight into your research experience.

My first semester, I took Modern Iran with Prof. Lior Sternfeld. In his class, we covered the experiences of not only the Muslim Iranians, but also those of the Jewish Iranians. In refining our scope for class, we learned more than the surface level Iranian identity, we learned about what it means to be Iranian when your identity seems self-contradicting (the relationship between Iranian Jews and Israel an example of this). As soon as I began to understand the complexity of identity in his class, I realized I found the Bosnian experience I wanted to research for my thesis: the Bosnian Jewish community.

The further I dove into my research, the more interesting it became. I ended up with the following abstract to reflect my paper’s topic:

Why did you decide to study Jewish Studies at Penn State?

I decided to study Jewish Studies at Penn State because I loved the courses (Israeli-Palestinian Conflict, Modern Jewish Communities, etc.) and felt incredibly supported by the faculty. Every JSP faculty member I met was kind, encouraging, and incredibly intelligent. They would show us students that it doesn’t matter your understanding of Judaism, Israel, or Jewish communities; what matters is your willingness to learn.

My Jewish Studies classes have always been my favorite classes at Penn State!

What has been your favorite part of the program?

The faculty of the Jewish Studies Program are incredibly supportive and kind. They are always available to help and answer questions. I loved my classes because of our outstanding professors.

Do you have any advice for students who are interested in becoming Jewish Studies students?

If you are curious about the world, passionate about your work, and ready for a challenge to your worldview, JOIN THE JEWISH STUDIES PROGRAM!!! This program has given me more than I could ever explain. From support on a trip to the American Historical Association Conference in New Orleans, to many books and brilliant conversations, I am so grateful for this program.

Even if you have never taken a JSP class before, I encourage you to try it—you will not regret it and will likely end up in the program (as myself and many others have done)!

What is your favorite place in State College?

I love Rothrock Café 🙂 In fact, I wrote most of my thesis in the cafe drinking their delicious coffee! I also spend a lot of time running trails in Shingletown—a great stress reliever when I am tired of writing. 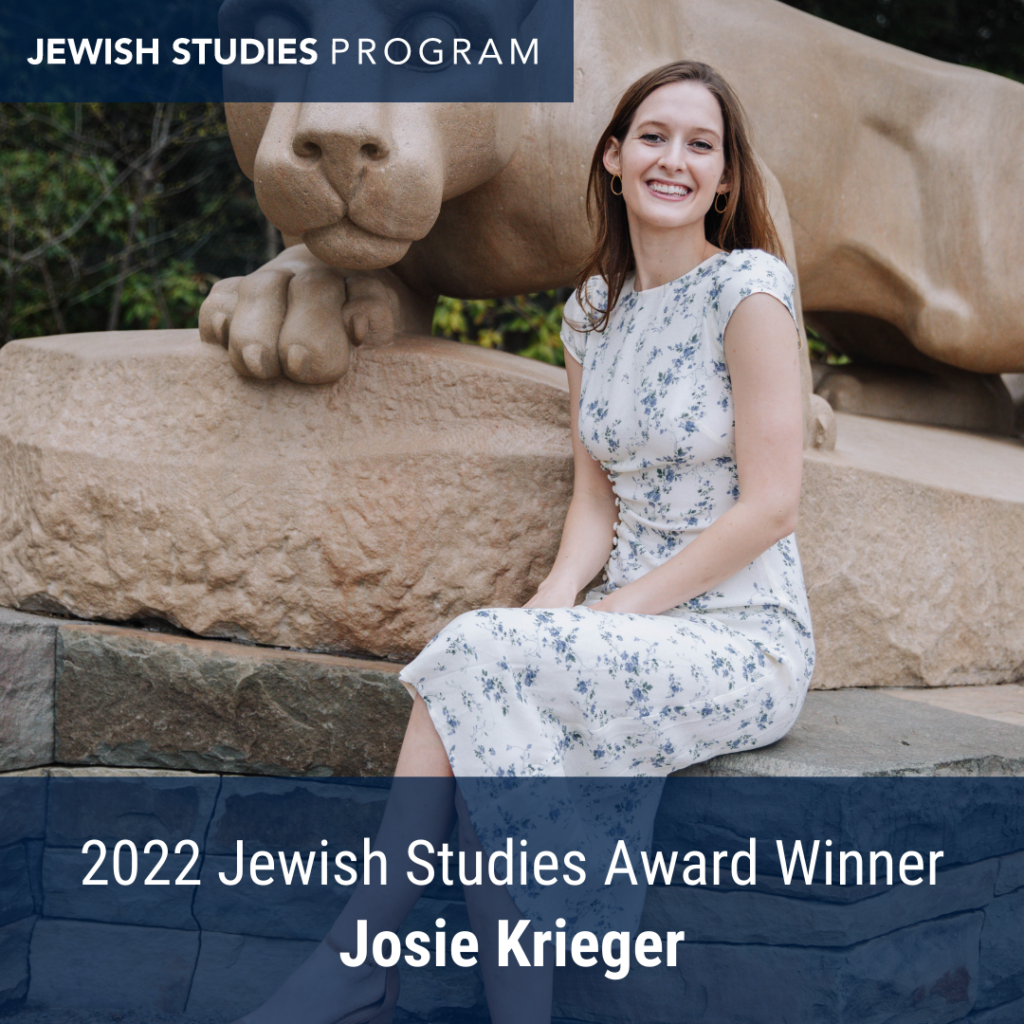